I have been on a quest recently to take back much of the language that we utilize around birth in our culture. (You can read another piece on the idea of my language revolution in regards to Community Birthing here.) For this piece, I plan to discuss the concept and language around delayed cord clamping. I would like to suggest an alternative phrase; physiologic cord clamping. When we use the word delayed, this makes it sound as though we are doing something abnormal and delaying what is normal or appropriate. Instead, let’s turn the tables and refer to immediate clamping as “premature” cord clamping and place the emphasis on this practice as an interruption in the normal process.

So, it seems logical to ask ourselves why our system still practices the non-evidence based practice of premature cord clamping? The available evidence is growing to support a return to physiologic cord clamping and it is starting to make a come back in certain areas. Let’s start by taking back the language; call out early clamping for what is as premature. And give the proper reference to delayed as physiologic cord clamping. If you are a birth attendant when do you clamp the cord and why? If you are a parent when was your baby’s cord clamped and where did you give birth? 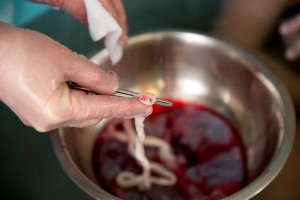