Skip to content
Home » empowered birth » The Womb at Birth

Birth. One word, one syllable, five letters. The Womb at Birth carries the transformative power of the universe.

I am accustomed to be conscious of, in tune to and in awe of the outward power of birth. The messy, beautiful making of a family. The gritty, earthy humanness of the work.  Birth workers are acutely aware of the strength it takes to walk through that veil and emerge on the other side with the promise of new life. We see it with our eyes, listen with our ears, feel it with our hands and our hearts. All of our senses engaged and dedicated to supporting the process. We understand the holistic nature of birth and labor; that we must support the entirety of the woman to facilitate birth. But what about the unseen? The part of ourselves that is able to harness life itself. The furnace that holds the flame, secures and nurtures the future of humanity. 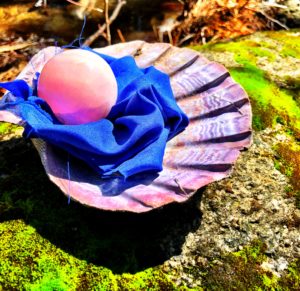 The non-pregnant uterus weighs approximately 50gm, is often compared to an upside down pear and is situated deep in the pelvis. It is made up of three layers. The outer, or peritoneal layer, is continuous with the serosa of the peritoneum and sheathes the uterus in a thin membrane, helping to keep it in place. The middle layer, or myometrium is composed of smooth muscle and the inner portion, the endometrium is made up of ciliated cells. These layers are further divided among themselves. Layer upon layer, laying the foundation for the growth and development of the pregnancy. Each is necessary and interconnected as part of the whole.

The endometrial layer is made up of  two parts; each month the stratum functionalis thickens and when there is no pregnancy, is shed as part of the menstrual cycle. Behind that is the stratum basalis the layer that remains and creates the new stratum functionalis with each new turning of the wheel.  In the endometrium, the developing blastocyst then embryo then baby is nurtured. It is the site of implantation and where the placenta will grow. The nest of warmth, blood and oxygen that fans the flames of life and soul.

The myometrium is the workhorse of the uterus, the smooth muscle that stretches to accommodate the growing baby and placenta.  Where the contractions that help to expel the baby during the birth process originate. These muscles are further divided into three more fibrous layers:

These three layers hold within themselves the immense power required to birth our babies, yet they are fluid and pliable enough to allow for immense change.

Uterine changes begin almost immediately with the fertilization of the ovum. By six weeks, there are three objective signs that pregnancy has taken root. As the vulva, vaginal mucosa and vaginal portion of the cervix become enriched with extra blood flow, they take on a blue-purple coloring known as Chadwick’s sign. Goodell’s sign is noticeable with the softening of the cervix and a palpable softening of the isthmus, or Hegar’s sign, can be detected by well trained hands. In a typical pregnancy, the first area of the uterus to change in shape is the coronal zone, the areas where the fallopian tubes meet the uterine fundus, this causes an asymmetry known as Piskacek’s sign and is palpable by the 8-10th weeks.

During pregnancy, the uterus grows by over 20 fold to accommodate an approximate capacity of up to 5 liters.  The dramatic growth of the uterus during pregnancy is achieved through two mechanisms; hyperplasia, the formation of new cells, occurs in the first half of pregnancy followed by hypertrophy or enlargement of those cells during the second half. By the end of pregnancy, the uterus has a thickness of only 5mm.  For perspective, one penny is 1mm thick; the whole of life is contained in a muscular pouch no thicker than a stack of 5 pennies.  The thinness of the veil that physically separates us from our babies is remarkable  for it is the embodiment of strength in resilience.

The Power of The Womb at Birth and beyond

The birth and postpartum periods are dominated by the incredible prowess of the uterus. During gestation, the uterus has grown and yet remained flexible while its’ tenacity secures the contents safely inside. Then, remarkably this same organ completes the work of releasing and expelling not only the baby but the placenta. This is accomplished by a pairing of both power and relaxation. Because, in order to have the strength there must be the rest phase and one is not possible without the other. After the birth is done the uterus then completes the process of returning to its’ pre-pregnant state. Within six short weeks, the work of the previous 40 weeks is undone and the process of involution has occurred and the uterus is once again tucked deep inside the pelvis.

Uterus. One word, one syllable, six letters and the throne of power.

The dwelling of the spark of life, the radiant source where the work and the magic thrive. The words used to name it are plentiful; matriz, grembo, baarmoeder, sabelean, bahay-bata, kopu, groth, isibeletho, livmoder, kandungan, womb.  No other organ in the human body is capable of such transformation, growth or strength. In learning and studying the uterus, in being at the side of laboring clients, I have come to be in awe of this deceptively simple muscle.

What are your thoughts about the Uterus?

2 thoughts on “The Womb at Birth”