Skip to content
Home » activism » Tools Of My Trade #7

Speculums, Clamps, Tenaculums and Scissors. These instruments are hard, cold, shiny and clunky.  These instruments are also Tools Of My Trade.  As a clinician, I appreciate them, use them for pap smears, rupture of membrane evaluations, placement of IUD’s and repairing of lacerations after birth. All valuable and necessary tasks. Of these instruments, the speculum is the most literally invasive, the tool used to open the most private part of ourselves and allow another person to peer inside.

As a woman, I strongly dislike them, they are harsh, invasive and downright uncomfortable.  So, I am left as a female clinician, attempting to make them as palatable as possible.  I use them with respect and always, always, always with permission. I use the smallest type possible, ask my clients if they would like to insert it themselves and offer to use a mirror for them to see their own body. All of this helps to make it less awkward but cannot completely erase the discomfort. The history of speculums and women’s health care is steeped in misogyny and misunderstanding; a complicated history that we must acknowledge in order to move forward.

*****This article is dedicated to Lucy, Anarcha and Betsey , keep reading to learn about these women.***** 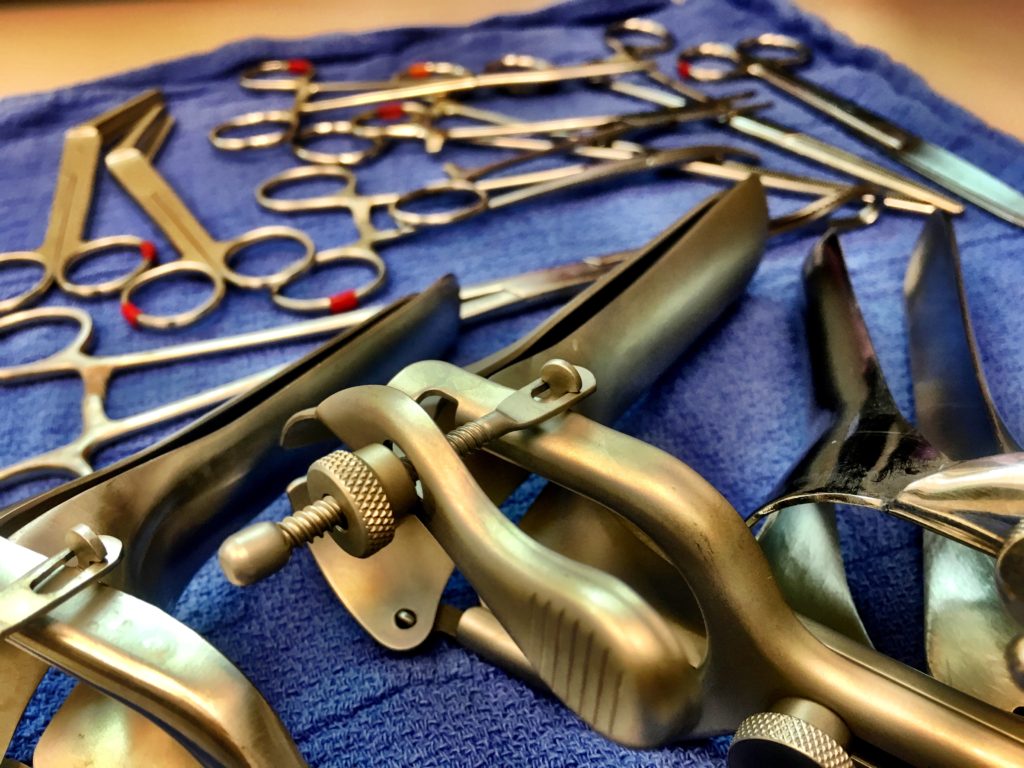 Tools of my Trade: Roots in Ancient History

Predecessors of the modern speculum have been in use for centuries. In fact, the oldest known devices were unearthed in the ruins of Pompeii and date back to 79A.D.  It may be difficult to imagine (or maybe not that difficult really) that the first speculums were even more sinister appearing than the modern devices, but they absolutely were. If you are brave, you can see images in this post from the University of Virginia on Surgical Instruments from Ancient Rome.

Flash forward to the early 1800’s in Italy, where Guiseppe Canella created a monstrous sounding speculum that included a knife in order to amputate cancerous lesions and the cervix. (I bet every person who has a vagina just involuntarily did a kegel with that one!) Luckily, he was never able to use this device on a live person and it never caught on with other physicians. Up to and through this time period, the speculum pretty much remained the same, with very little innovation, as the ancient versions. Then a Midwife came along….

Tools of my Trade: Midwifery Enters

There have been countless books, articles and essays written on the history of Midwifery and its relationship with Obstetrics. The tale is fraught with misogyny, racism, classism and the male fear of the feminine.  I will not attempt to delve too deeply here. Suffice to say; Midwives have been serving pregnant and birthing folks since the dawn of time. When Medicine was first creating itself as a male-dominated, elite profession the work of supporting people through pregnancy, birth, postpartum and breastfeeding was not considered worthy of study. These male physicians felt it was “women’s work” only and they would not lower themselves to be involved. So, the midwives continued to work and serve, mostly unhindered….and that was actually fine! Then, some male physicians realized that they were missing out on a big source of potential patients and revenue so Obstetrics was born. Midwives were now seen as competition and the centuries long work to discredit them began. Now, this is a simplified version of a very complex tale. If you are interested in the full story, particularly the history in America, I will include links below.

There is one tale (there are others as well, but they are few and far between for centuries) of a Midwife who succeeded in the male dominated field of medicine. Marie Anne Boivin (nee Victoire Gillian) was a French born woman who lived from 1773-1847. Marie studied Midwifery in her early years, but them married and had a daughter. Sadly, within a year of having her child, her husband died and she was left a single mother to support herself and her daughter. So, she returned to Midwifery and excelled. Her list of accomplishments is long; she is credited as the first person to use a stethoscope to listen to the fetal heartbeat, she invented the pelvimeter, discovered and documented the causes of miscarriages, as well as determined the causes for many types of abnormal bleeding, and was a prolific writer and medical illustrator. She was referred to as the “most prolific medical writer who ever lived”. Many of her books became valued textbooks for decades. Marie was an inspirational Midwife who left her mark on the profession to be sure. The reason I bring her up in this context is that she is also known to have re-designed the ancient speculum to the form we now recognize today. She re-tooled the design and added the locking mechanism that holds it open so the clinician can have their hands free for the exam. Does she get credit for this in most medical histories? You guessed it…she does not.

Tools of my Trade: A Horrible Stain

The person, who today is widely credited with the creation of the modern speculum is J. Marion Sims, MD who is often referred to as the “Father of Gynecology”.  In 1849 Alabama, Sims did develop and create a surgical technique for the repair of Vesicovaginal Fistula or VVF, a devastating condition that causes women to continually leak urine or feces from the vagina. It is often caused by long, impacted labors. Historically, there was no successful treatment and women who suffer from this condition are often ostracized and abandoned by their communities. However, the ways in which Sims developed his technique were abhorrent. He experimented, without anesthesia, on enslaved women in dreadful circumstances with little to no regard for their well being. His ethics and behavior have been questioned, some defend him as a “man of his time and place” to excuse this history. I believe that the subjects of his experiments may beg to differ. Because, his subjects were enslaved women, we know very little about them, but he did record the names of three of them; Lucy, Anarcha and Betsey. These woman are who we should remember, whose names we should say. An NPR piece on Lucy, Anarcha and Betsey can be found here. And a justifiably enraged and powerful piece titled, “Our Unsung Mothers of Modern Gynecology; How White History Shades Black Pain”, can be found here.

Tools of my Trade: Now what?

So where does this history leave us modern Midwives? Simply put, conflicted. I will always think of Marie Anne Boivin and her contributions as well as the countless, nameless Midwives throughout history. I will say the names of Lucy, Anarcha and Betsey often and whenever necessary.

As a cis-gendered woman, I have had several pelvic exams involving the use of a speculum over my lifetime. Some of these experiences have been good and some have been bad. One such story that has always stuck with me:

I was seeing a new provider, who I had never met. She was pleasant enough but did not attempt to really have a discussion with me. She was all about the business, check off the requirements. Her movements were efficient but cold. She placed the speculum and cranked it open to look inside at my cervix. To which she exclaimed, “You must have had really big babies!” This may seem relatively innocuous but, to me, it was horrifying. ‘What does she mean? Is my cervix all floppy and gaping? Why would you say that to me in this situation?’ These were the thoughts that began swirling in my mind and festered there for days.

Due to this experience, and others not so innocent, that I myself have endured, I am committed to providing compassionate, evidence based care with full informed consent and permission from my clients. I do this slowly and deliberately with full explanation of what will be felt and when. It may take a little longer to do an exam this way but it is worth it. We are worth it, we deserve this type of care. As a midwife, I do love birth of course, but one of the finest (and favorite) compliments I receive is “That was the best pap smear I have ever had!”

What are your experiences with pelvic and speculum exams?

Resources for the History of Midwifery and Midwives:

A short video to introduce the powerful work of Granny Midwives in the American South, and a link to watch the full documentary “All My Babies; A Midwife’s Own Story. And an article on the same subject.

From Our Bodies, Our Selves an article by Judith P. Rooks on the History of Midwifery in the US.

Witches, Midwives, & Nurses; A History of Woman Healers is a classic book on the subject. Another good resource book is Lying In: A History of Childbirth in America by Richard W. Wertz and Dorothy C. Wertz.

For a broader world perspective, check out this this article.

And finally, the speculum design is getting a fresh look from a dynamic group of women, you can read about them here and check out their re-vamped design, the Yona.