The Witches Testimony. We came forward, we stood tall together and spoke our truth. Call us witches, healers, midwives, women; we will accept all the names and carry them forward.  The room was full, all the ears and all the eyes were open. Centuries ago, when we testified the outcomes were forgone; we would lose and we would pay the price with our lives.  Today, the playing field is somewhat more level, the outcome was not forgone but make no mistake there was a battle. The need for this fight, the very fact that we had to gather for this issue stands as a testament to how entrenched the power is. The power to govern the bodies of birthing people, people with wombs, the life-bearers. The power to govern where and how families give birth is still entrenched in the patriarchal system, cloaked in the well meaning theme of caring for our safety. As if we are small children who must be supervised and cared for, kept out of trouble and manged for our own good. As if we did not have autonomous determination as humans. You may be wondering why I am so riled up, and it may seem an overreaction but make no mistake; all the “small” attacks can and will add up if we do not pay attention.

Last week, we gathered in the CO State Capital before the Senate Committee overseeing the bill to ensure that homebirth attended by CPM’s would remain legal.  We were consumers, advocates, midwives, doctors and parents. Together our voices were heard and we gained a small but important victory in the convoluted legislative process.

I live in a state that overall has reasonably good laws surrounding midwifery. As a CNM, I can practice independently and in any setting I choose: home, birth center or hospital. Homebirth is legal and CPM’s are recognized as skilled providers by the law and are able to practice openly. Very few things in life are perfect and of course there are things in each arena that could be better, but again, overall we are in a good place. Imagine my shock then, when I learned that this year as part of the legislative sunset review of non-nurse midwives that a significant amendment had been added that would restrict the care they can provide. The state chapter of ACOG (American Congress of Obstetricians and Gynecologists) managed to add the caveat that these providers should not be able to attend home VBAC (Vaginal Birth After Cesarean).

Let’s back up a little bit. In 1993, non-nurse midwife attended home birth became legal in CO. At that time, the law allowed these Registered Midwives (RM’s) to care for and attend the births of pregnant people who had had a previous birth via cesarean. Since then, there have been no documented cases of a catastrophic outcome for a family attempting a home VBAC attended by a RM. So, why the sudden desire to take away the rights of these families to choose their place of birth? Excellent question and one that I wish I had a good answer for.

I am a CNM or Certified Nurse Midwife. Currently, I do not attend home births but rather work in a free standing birth center. Unfortunately, the laws governing my birth center prohibit me from accepting VBAC clients. (Remember me saying that my state laws are pretty good but not perfect?) So, when the Colorado Midwives Association asked me to testify on their behalf, why was I so willing to do so? Because, this is a human rights issue and I believe passionately in the availability of choice for families when planning their place of birth. I also strongly believe that all midwives must stand together, a topic I have discussed here previously. I will always choose to support my midwifery colleagues when they are threatened by oppression.

The Senate committee hearing was crowded, they could not fit all the attendees in the room and had to open an overflow room. We had to listen to the attacks first, the people testifying against the rights of families in their care making decisions. It was difficult to listen to and more than once I had to bite my tongue to prevent an outburst against their accusations. At the turn of the century, “lay” midwives were vilified by the American Medical Association and painted as uneducated, dangerous characters. In 2016, the accusations are cloaked more discreetly but believe me they are still there. Then, it was our turn. I was often moved to tears by the heartfelt stories shared by parents, I was proud to hear the intelligent words of other midwives and a supportive physician. I was inspired by the remarks from consumer advocates.  I was honored to add my voice to the chorus. In the end, we succeeded and the bill was passed through the committee with out the VBAC ban. Now it moves on to the main Senate floor for the full vote.

Things learned in my experience testifying:

Historically, women have been labeled as witches for many reasons but mostly it has been used to strip us of our power, autonomy and even our humanity. Healers and midwives were one of the first targets for this process. This is why I will gladly carry the label witch, in honor of all the ones before me who paved the way for me to be where I am standing now. This is why I will share my knowledge and study the past while moving to the future. We must never forget the witches testimony and why we should never allow our voices to be silenced. 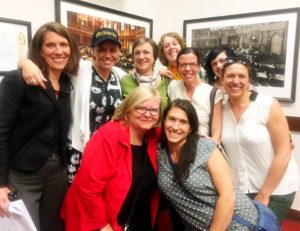